The thought occurred that not everyone wants to take their notes in Scrivener. You might prefer the simple elegance and speed of Notational Velocity, for instance. Yet, when it comes time to integrate those notes, to interrogate those notes, to rearrange them to see what kind of coherent structure you might have, Scrivener is hard to beat.

With Notational Velocity installed, go to ‘preferences’. Under ‘Notes’ change ‘Read notes from folder’ to point to the Scrivener synchronization folder. Then, change ‘store and read notes on disk as:’ to ‘rich text format files’. This will save every note as a separate rtf file in the folder. Now you can go ahead and use Notational Velocity as per normal. Notational Velocity uses the search bar as a way of creating notes, so start typing in there; if it finds existing notes with those keywords, it’ll bring them up. Otherwise, you can just skip down to the text editing zone and add your note.

When next you sync scrivener, all of these notes will be brought into your project. Ta da! A later evolution of Notational Velocity, nvALT, has more features, and can be used locally as a personal wiki (as in this post). I haven’t played with it yet, but given its genesis, I imagine it would be easy to make it integrate with Scrivener this way. (A possible windows option is Notation, but I haven’t tried it out yet).

I’ve combined all of my automator applications into one single automator app, a superrobot if you will, that grabs, converts, creates a table of contents in markdown, and pushes the results into github, whereupon it lives within my markdown wiki page. I found I had to insert 10 second pauses between stages, or else the steps would get out of order making a godawful mess. Presumably, with more notecards, I’d have to build in more time? We shall see. No doubt there is a much more elegant way of doing this, but the screenshot gives you what you need to know:

Update with Caveat Ah. Turns out that the Scrivener sync feature renames the notes slightly, which seems to break things in Notational Velocity. So perhaps the workflow should go like this:

1. Use notational velocity to keep notes, and for its handy search feature.
2. Have preferences set to individual files as rtf, as above, in a dedicated folder just for notational-velocity.
3. Create an automator app that moves everything into Scrivener sync, for your writing and visualizing of the connections between the notes.
4. Sync scrivener, continue as before. OR, if you wish to dispense with scrivener altogether, just use the rtf to md script and proceed.

Oh, and as Columbo used to say… “…one more thing”: Naming. Some kind of naming convention for notes needs to be developed. Here is some really good advice that I aspire to implement.

Do my bidding my robots!

I’ve sussed the Scrivener syncing issue by moving the process of converting out of the syncing folder (remember, not the actual project folder, but the ‘sync to external folder’). I then have created four automator applications to push my stuff to github in lovely markdown. Another thing I’ve learned today: when writing in Scrivener, just keep your formatting simple. Don’t use markdown syntax within Scrivener or your stuff on github will end up looking like this \##second-heading. I mean, it’s still legible, but not as legible as we’d like.

So – I have four robots. I write in Scrivener, keep my notes, close the session, whereupon it syncs rtf to the ‘external folder’ (in this case, my dropbox folder for this purpose; again, not the actual scrivener project folder).

Maybe it’s possible to create a meta-automator that strings those four robots into 1. I’ll try that someday.
[pause]
Ok, so of course, I tried stringing them just now. And it didn’t work. So I put that automator into the trash –
[pause]
and now my original four robots give me errors, ‘the application …. can’t be opened. -1712’. I found the solution here (basically, go to spotlight, type in activity, then locate the application on the list and quit it).

Here are my automators: 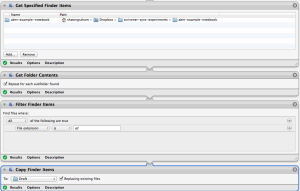 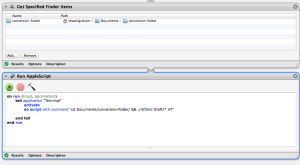 I think I love you.

A couple of updates:

The four scripts that sparkygetsthegirl crafted allow him to

2. sync to a Dropbox folder,

4. then open those md files on an android table to write/edit/add

5. and then reconvert to rtf for syncing back into Scrivener.

I wondered to myself, what about some of the online markdown editors? Dillinger.io can scan Dropbox for md files. So, I went to Dillinger.io, linked it to my dropbox, scanned for md files, and lo! I found my project notes. So if the syncing folder is shared with other users, they can edit the notecards via Dillinger. Cool, eh? Not everyone has a native app for editing, so they can just point their browser’s device to the website. I’m sure there are more options out there.

I was getting syncing errors because I wasn’t flipping the md back to rtf.

But, one caveat: when I went to run the md to rtf script, to get my changes back into Scrivener (and then sync), things seemed to go very wonky indeed. One card was now blank, the others were all Scrivener’s markup but Scrivener wasn’t recognizing it.

So I think the problem is me doing things out of order. I continue to play.

I automated running of the conversion scripts. You can see my automator set up in the screenshot below. Again, I saved it as an application on my desktop. First step is to grab the right folder. Second, to open the terminal, input the commands, then close the terminal. 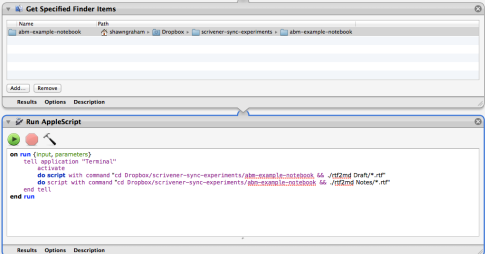 I was asked why on earth would I want to share my research notes? Many many reasons – see Caleb McDaniel’s post, for instance – but one other feature is that, because I’m doing this on Github, a person could fork (copy) my entire research archive. They could then use it to build upon. Github keeps track of who forks what, so forking becomes a kind of mass citation and breadcrumb trail showing who had an idea first. Moreover, github code (or in this case, my research archive) can be archived on figshare too, thus giving it a unique DOI *and* proper digital archiving in multiple locations. Kinda neat, eh?

I’m a bit of a visual learner, I suppose. (Which makes it ironic that I so rarely provide screenshots here. But I digress). What I’ve been looking for is a way to share my research, my lab notes, my digital ephemera in a single notebook. Lots of examples are out there, but another criterion is that I need to be able to set something up that my students might possibly be able to replicate.

1. Visually see my notes, their layout, their possible logical connections. The ability to rearrange my notes provides the framework for my later written outputs.

2. Get my notes (but not all of the other bits and pieces) onto the web in such a way that each note becomes a citable object, with revision history freely available.

3. Ideally, that could then feed into some sort of shiny interface for others’ browsing – something like Jeckyll, I guess – but not really a big deal at the moment.

So #1 is taken care of with Scrivener. Number 2? I’m thinking Github. Number 3? We’ll worry about that some other day. There are Scrivener project templates that can be dropped into a Github repository (see previous post). You would create a folder/repo on your computer, drop the template into that, and write away to your hearts content, committing and syncing at the end of the day. This is what you’d get. All those slashes and curly brackets tell Scrivener what’s going on, but it’s not all that nice to read. (After all, that solution is about revision history, not open notebooks).

Now, it is possible to manually compile your whole document, or bits at a time, into markdown files and to commit/sync those. That’s nice, but time consuming. What I think I need is some way to turn Scrivener’s rtf’s into nice markdown. I found this, a collection of scripts by Sparkygetsthegirl as part of a Scrivener to Android tablet and back writing flow. Check it out! Here’s how it works. NB, this is all Mac based, today.

2. Sync it to dropbox. (which is nice: backups, portability via Dropbox, sharing via Github! see below)

3. drop the 4 scripts into the synced folder. Open a terminal window there. We’ll come back to that.

4. open Automator. What we’re going to do is create an application that will open the ‘drafts’ folder in the synced project, grab everything, then filter for just the markdown files we made, then move them over to our github repo, overwriting any pre-existing files there. Here’s a screenshot of what that application looks like in the Automator editing screen:

Remember, you’re creating an ‘application’, not a ‘workflow’

You drag the drafts folder into the ‘Get specified finder items’ box, get the folder contents, filter for files with file extension .md, and then copy to your github repo. Tick off the overwrite checkbox.

Back in scrivener, you start to write.

Here’s a screenshot of how I’m setting up a new project.

In this screenshot, I’ve already moved my notecards from ‘research’ into ‘draft’. In a final compile, I’d edit things heavily, add bits and pieces to connect the thoughts, shuffle them around, etc. But right now, you can see one main card that identifies the project and the pertinent information surrounding it (like for instance, when I’m supposed to have this thing done). I can compile just that card into multimarkdown, and save it directly to the github repository as readme.md.

Now the day is done, I’m finished writing/researching/playing. I sync the project one last time. Then, in the terminal window, I can type

for everything in the draft folder, and

for everything in the notes folder. Mirabile dictu, the resulting md files will have the title of the notecard as their file name! 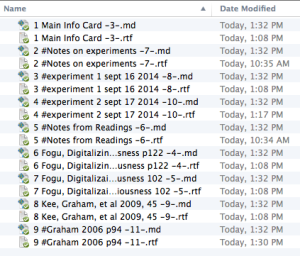 Here, I’ve used some basic citation info as the name for each card; a better idea might be to include tags in there too. Hey, this is all still improv theatre.

Now, when I created that application using automator, I saved it to my desktop. I double-click on it, and it strains out the md files and moves them over to my github repository. I then commit & sync, and I now have an open lab notebook on the web. Now, there are still some glitches; my markdown syntax that I wrote in, in Scrivener, isn’t being recognized on github because I think Scrivener is adding backslashes here and there, which are working like escape characters?

Anyway, this seems a promising start. When I do further analysis in R, or build a model in Netlogo, I can record my observations this way, create an R notebook with knitr or a netlogo applet, and push these into subfolders in this repo. Thus the whole thing will stick together.

I think this works.

~o~
Update Sept 18. I’ve discovered that I might have messed something up with my syncing. It could be I’ve just done something foolish locally or it might be something with my workflow. I’m investigating, but the upshot is, I got an error when I synced and a new folder called ‘Trashed Files’, and well, I think I’m close to my ideal setup, but there’s still something wonky. Stay tuned.

Update Sept 19 Don’t write in Scrivener using markdown syntax! I had a ‘doh’ moment. Write in Scrivener using bold, italics, bullets, etc to mark up your text. Then, when the script converts to markdown, it’ll format it correctly – which means that github will render it more or less correctly, making your notes a whole lot easier to read. Click on ‘raw’ on this page to see what I mean!