Warning: There are many photographs of human remains in this post.

There is a literature on the online trade in human remains going back to at least Huxley and Finnegan’s 2004 piece on eBay in the Journal of Forensic Science,  and since then, several academics have been active in discussing the ethical, moral, and legal dimensions of this trade, producing a steady stream of articles. At the same time, the trade was transformed by the merging of social media with marketplace and ad-driven revenue models, expanding in scope and reach. Several platforms, over the last decade, have added wording to their prohibited categories of goods that deals with human remains. Let’s walk through some of that.

I found a copy of the World Archaeological Congress 2010 Newsletter in the Internet Archive, with this one line describing a human skull seen on Etsy, and WAC’s successful request to Etsy to remove the post.

The post was not in fact removed. And can still be found online.

Etsy’s current policy on human remains. Such as it is. Human remains were added to the prohibited list in 2012.

The seller from 2010, still active, using a different skull as a prop. Still selling human remains, now points people towards her Facebook page, and since Etsy banned human remains, wants you to send private messages if you’re interested. Facebook’s good for that sort of thing, eh? Private messaging, I mean.

We are not surprised, to find human remains on Facebook. After all, Facebook owns Instagram, and there are any number of posts there selling human remains. Including this one. But wait, is that an Amazon box? Does Amazon have a human remains policy?

Yes, yes they do. And it seems a bit contradictory. And unenforced. 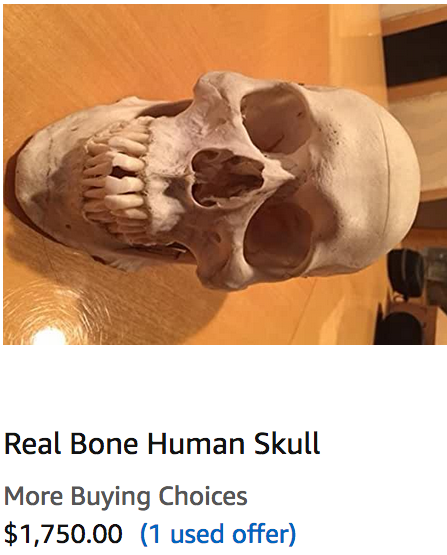 And it is trivial to find human remains being sold on Amazon. Like this skull. Displayed sideways, since the photo was taken with the seller’s cellphone.

Since I’m on wordpress.com, you might see advertisements interspersed in this essay. It will be interesting to see which advertisements WordPress matches to this post; it might even be hard to see the difference between those ads and these screencaptures. 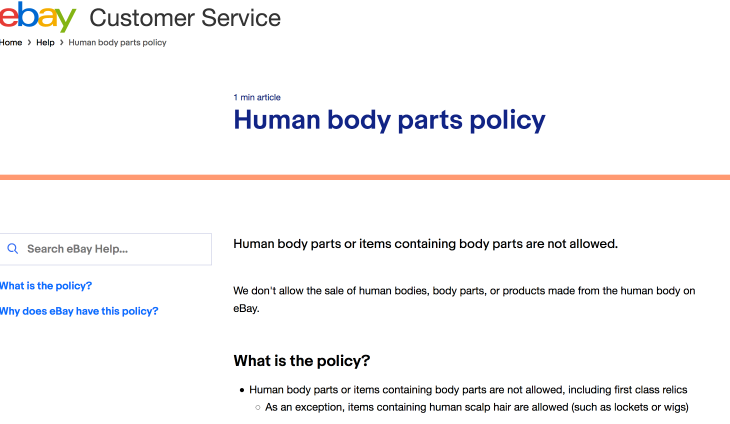 It was on eBay that we all (the archaeological ‘we’) first twigged that human remains selling online was lucrative and booming. While their policy has changed over the years, the policy is now admirably lucid and succinct. Did this tighter, stronger, policy have any impact?

It is possible to find the ruins and remains of specialist eBay aggregator sites like this one in the Internet Archive. I spent quite a lot of time tracking as many of these down as I could, teasing out which posts were actually for human remains, and which ones were replicas or adjacent materials, and scraping the data, plotting it over time.

And I see three phases here. An early phase where there was a lot of money happening (remember, these values are approximate indications rather than absolute totals. They give us a sense of the trend rather than the exact dollar number); a phase where language is suddenly cagey about what precisely is being sold (the stand? or the skull? Remember the earlier wishy-washy policy of 2012?), and the volume drops; and then, from July 2016: eBay bans human remains outright. And human remains drop out of the aggregators completely. The ban – to judge from these numbers – worked. Graphs and underlying research Graham, forthcoming.

Have we accomplished anything? eBay certainly has, I think, and that’s worth thinking about.  Perhaps an auction site where sales are also dependent on reputation responds better to moral suasion than the other platforms. When is it in a platform’s best interest to actually police its own policies?

Human remains are in a nebulous zone, legally. In Canada, the law to my mind seems pretty clear:

Section 182.B seems to cover it. These materials are human beings. Buying and selling humans interferes -at the very least!- with human dignity. I’m no lawyer, and I don’t think this has ever been tested in court. But: If a platform profits from a user’s breaking of the platform’s very own policies on human remains, if a platform turns a blind eye, is the platform not condoning the trade? Is this not a nudge-nudge wink-wink tacit approval of the trade? Who should want to invest in a platform that makes money from selling human beings? Should we not hold such a platform accountable?

See ACCO for more on various illicit and illegal trades happening across social media. For more on our project studying the trade in human remains, see bonetrade.github.io.

Posts referred to have also been saved to the Internet Archive.