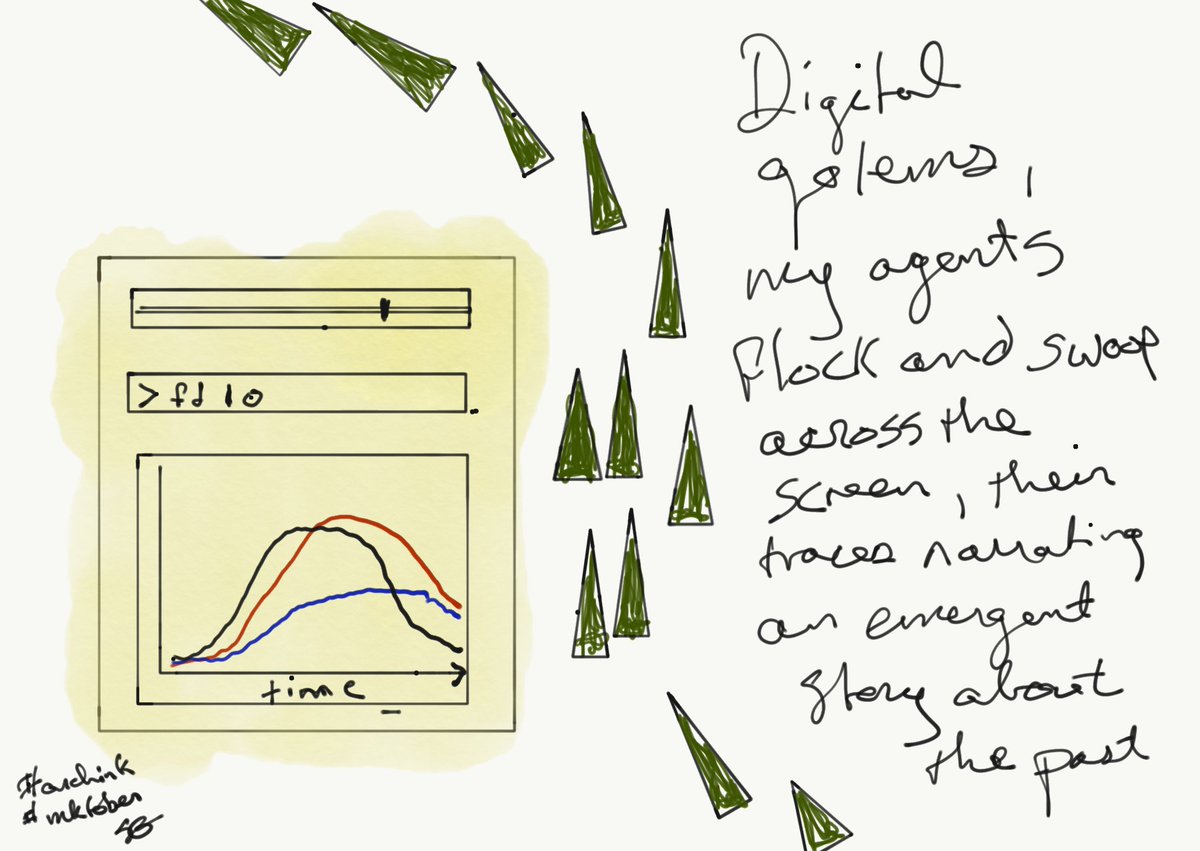 What is more rational than a computer, reducing all phenomena down to tractable ones and zeros? What is more magical than a computer, that we tie our identities to the particular hardware or software machines we use?…Archaeology, as conventionally practiced, uses computation to effect a distancing from the world; perhaps not intentionally but practically. Its rituals (the plotting of points on a map; the carefully controlled vocabularies to encode the messiness of the world into a database and thence a report, and so on) relieves us of the task of feeling the past, of telling the tales that enable us to envision actual lives lived. The power of the computer relieves us of the burden of having to be human.

An enchanted digital archaeology remembers that when we are using computers, the computer is not a passive tool. It is an active agent in its own right (in the same way that an environment can be seen to be active)…In that emergent dynamic, in that co-creation with a non-human but active agent, we might find the enchantment, the magic of archaeology that is currently lacking in the field.

An Enchantment of Digital Archaeology: Raising the Dead with Agent Based Models, Archaeogaming, and Artificial Intelligence with Berghahn Books in New York, in the series edited by Andrew Reinhard, ‘Digital Archaeology: Documenting the Anthropocene’, has now moved to the next stage of the publishing process. I signed the contract two years ago, got the first draft to the editor in June of this year, got the peer reviews back in September, rejigged the damned thing, rewrote parts, rearranged the structure, added new parts, and resubmitted it earlier this month. The peer reviews were incredibly generous, even when some parts or decisions on my end left them cold, and so of course the end result isn’t their fault, as the acknowledgements will duly note.

In one way or another, this is the book that I’ve been trying to write since I came to Carleton. I might’ve even outlined the idea for this book in my original application for the job. It’s always had a pedagogical aspect to it, even when it was called Toying with the Past (too negative) and then later Practical Necromancy (too scary). But what finally made things start to click were conversations with the folks at the University of York, who as a department seem to really gel around ideas of reflexivity, affective engagement, and plain ol’ out-there digital archaeology. I love them all!

The book is meant to take the reader through my own experience of disenchantment with archaeology, and then the ways I found myself re-enchanted through digital work. The intended audience is undergraduate students; I am not writing a how-to, but rather, I want to enthuse with the possibilities, to spark curiosity, and to fire the imagination.

Anyway, the publisher asked me to write abstracts for each chapter, and said I could share them here, so awwaaaaay we gooooo!

Introduction: An Enchantment of Digital Archaeology?

‘Enchantment’ is discussed, drawing on the political philosophy of Bennett, and contrasted with the ways archaeology comes to know the past. The rupture of the past into the present is one locus of enchantment. The chapter argues that simulation and related digital technologies capture something similar. A rationale for why simulation should be a necessary part of the archaeologist’s toolkit is offered. Considering enchantment means confronting disenchantment, and so prompts a reflective examination of the purpose of archaeology and archaeological computing. This kind of reflexive writing necessarily requires a very personal engagement with the materials. The chapter concludes with a discussion on some of the potential dangers of misunderstanding ‘enchantment’ as ‘seduction’.

Chapter One: Imagine a Network

Networks are a foundational metaphor for digital archaeology. If we can imagine the archaeological past within a system of relationships, we are dealing with networks. Networks can then be operationalized as the substrate for simulation, and the substrate for computation. The chapter sets up a longer discussion where we begin with a network as metaphor before moving towards more grounded and less metaphorical uses. It imagines the city of Rome as a process of flows through intertwining networks, a process of concretization of flows of energy and power and materials.

Chapter Two: Reanimating Networks
Agent based simulations are introduced. Their potentials and limitations are discussed, as well as the ways the code of the simulation captures the historiography of the phenomenon under discussion. Part of the attraction of agent based models rests in their formalization of the ‘just-so’ stories we might normally tell. This allows us to test the unintended or unforeseen consequences of those stories. We create self-contained software agents and give them rules drawn from our understanding of the past to guide their behaviour – and then we turn them loose to interact within the channels of the archaeological networks we have uncovered. In this case, the network of inter-urban communications.

The network can exist in social space, in addition to physical space. The social information recovered from stamped Roman bricks can be stitched into a network of human interactions over time; these networks can then be used as the starting point for simulating ancient social dynamics, and for asking what-if questions. The chapter concludes with a reflection on how such computational agents might escape from the confines of the machine, and what that implies for how we might know or have an affective response for the past. One way is that the labour these resurrected Romans, these ’digital zombies’ do depends on compelled labour in the ‘real’ world. How we talk about the creatures we create (in silicon) has ramifications for the world outside the machine.

One way for the archaeologist to sink into the digital assemblages reanimated with simulation is to transform the simulation into a game. Archaeogaming is considered in the sense of playing games with archaeological themes. A theory of play is also a theory of learning. The simulation considered in the previous chapter is recast as an archaeogame and the consequences of ‘playing’ this game are considered. The points of intersection between archaeogames and agent based models are considered for the ways in which the two forms differ. The chapter concludes with a discussion of a case study where students were asked to design games to communicate ‘good history’. The play of building leads to greater engagement and enchantment.

Chapter Five: The Fun is in the Building

A case study building an actual video-game informed by an agent based model is discussed, including design elements and a post-mortem on the successes and failures of the project. The ethics of game play and meaningful individual choices as they intersect with a larger society-level simulation should make for an engaging experience, but our lack of expertise in actual game design hampers the project. There is a mismatch between the mechanics of the genre and the dynamics of the cultural experience we wish to explore. Returning to the idea of the city of Rome as a kind of emergent outcome of dynamic flows, we consider the city management genre and its connections to archaeogaming. The chapter concludes with a consideration of how an analogue format, the board game, promotes the kind of digital thinking and enchantment we are seeking.

Networks are capable of computation. Neural networks enable us to represent our archaeological information and historical imagination in ways that a computer can engage with creatively. A simple recurrent neural network is trained on the writings of various historical personae so that it can mimic their voice. A very complex language model released by the OpenAI foundation is used as a kind of parameter space out of which we can collapse its understanding of ‘archaeology’, as filtered through its understanding of the writings of Flinders Petrie. The enchantment of digital archaeology might therefore sit at the point of combination of powerful neural network models of knowledge with agent based models of behaviour and archaeogaming methods for interaction.

Conclusion: Enchantment is a Remembering

Digital artefacts are subject to decay and ruin. They sometimes erupt into the digital world’s ever-present ‘now’ in the same ways archaeological materials interrupt the physical world of today. To program something necessarily means cutting away information, and to understand how something is programmed involves actively trying to break it, to see in its ruptures what has been cut away. There is enchantment in this process. The simulations and toys that the book considers also point to the playfulness that is necessary to find the enchantment in digital archaeology. Ultimately, the growing power of digital technologies to pluck representations of the past out of the possibility space of computation increases our responsibility to the dead to be truthful, to be engaged, and to be enchanted.

Afterword: Guidelines for developing your own digital archaeology

Code walk throughs for developing some ABMS and re-implimenting one of my earlier models.