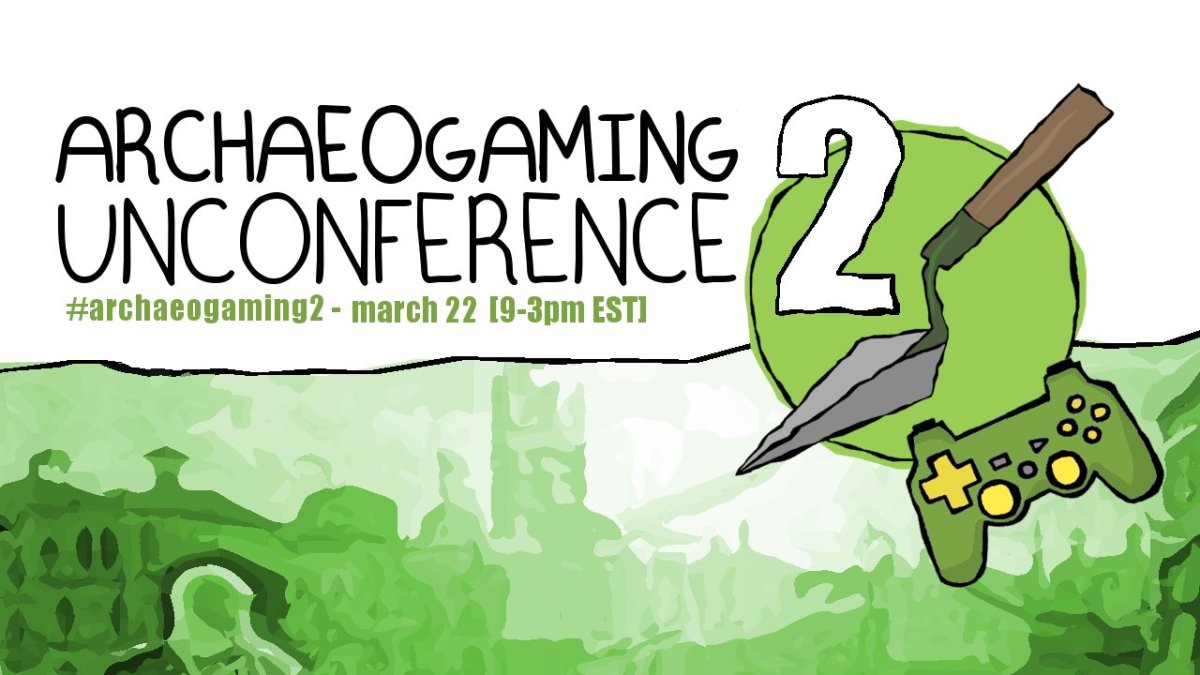 The second Archaeogaming Virtual Unconference Biennial was held today, in the misty realms of cyberspace. Or at least, that corner of it that can be found at the MIT Unhangouts project. I meant to take some screenshots of the unconference in action, but I forgot to ask the others if that would be ok and in any event, I forgot to take the screenshots anyway. In this post, I thought I’d explain how we made it work, things that didn’t work, and things that were awesome.

First, let’s talk about the interface. The Unhangout was originally a kind of overlay for wrangling a number of Google hangouts as breakout rooms, and providing a centralized space where people could come back together before moving into new rooms. Part of the reason that our unconference was delayed earlier this year is because the MIT folks were in the process of rolling out their own platform (rather than relying on Google). Below is a screenshot before anyone turned up. Let me take you through what happens.

The central panel is the chat window. The little ! button to the right lets you, the moderator, highlight any particular message in a great big swathe of green so as to grab everyone’s attention. The dropdown at the top of the chat window is where you can put text and links explaining your event. During our event, I had links to our schedule, our Trello boards, and our code of conduct – as well as a note of welcome!

On the right at top is a video window (for both live broadcasting and for preloaded videos) and then at bottom the breakout rooms. To pre-load a video (from youtube or wherever), you the moderator paste the link in, then behind the dropdown ‘Action’ you click ‘add to list’. Then, when you’re ready to play it, you can click on the other drop down to select it. Alternatively, you can click (under ‘action’), ’embed’ and it loads up right away. Your unconferencees can see it and watch it when they want to, or you can force everyone to watch it by hitting ‘play for all’.  In that left dropdown (beside the video URL box) you can also hit ‘live broadcast’, and the ‘play for all’ button will change to ‘join live broadcast’. At that point, you are broadcasting directly into the main unconference space and your attendees can hear and see you. We asked the Unhangout folks if Tara and Andrew could also be made hosts of the event (and thus be able to start videos, approve breakout rooms etc) and this let them join the live broadcast as well. Below, the video I created to greet everyone who joined the unconference:

That’s my ugly mug, yes, practicing last night, getting familiar with the interface. Note the little computer icon at the top: that lets you share your desktop (via a plugin it takes you to on the chrome webstore). Texting is possible via the little speech bubble icon, the document icon reveals a collaborative etherpad and the play icon at bottom lets you wire everything up to a live broadcast through youtube. Max 10 participants in a breakout room at any one time.

Finally  – thanks to Katrina Foxton’s inspired suggestion – we used a Trello board as a collaborative note taking platform (you can see a pics etc of how the Heritage HotPot unconference went down here). You can explore ours here. I was having so much fun I did a really poor job of keeping notes, but Tara was great – here’s a shot from the ‘games that make scholarly arguments’ session:

What’s nice about each one of those cards in the lists is that (potentially) a threaded conversation can happen, more resources can be attached, they can be sorted into other lists, etc.

Oh, one last thing – while we could’ve had participants propose ideas first thing in the morning, and use the breakout-voting feature to decide what we were going to do, I didn’t know that that feature existed until last night (….’proper prior planning prevents p@#% poor performance’, Shawn…) so we went with All Our Ideas a system that allows ideas to be submitted, and the best ideas to surface via pair-wise voting. We looked at the results, and then divvied things up, scheduling with a Google sheet earlier this week.

And I tried to live-tweet whilst facilitating too, because, why not.

And I put together a Code of Conduct because while people shouldn’t need reminders not to be jerks, I don’t take anything for granted these days. The Geek Feminism wiki was our model.

Ideally, before one does something like this, you have an opportunity to road-test everything you’re about to do. For various reasons, this didn’t happen. Or rather, Andrew and I tried last night, but got confounded on one or two points. One of the issues we were having was that Andrew could hear and see me, but I could not hear a blessed thing on my end. And then he got booted off with a mysterious 500 error. Given how often ‘did you try turning it off and on’ often is the solution that works, we called it a night and hoped everything would work out fine.

What the hell, we figured.

Come this morning, at 8.30, I was still having the same issue. I googled furiously, I ran arcane terminal commands only dimly comprehended, I switched to another computer. And then another. And most of this happened within the first 20 minutes of official on-the-clock unconference time. Not the time to be doing tech troubleshooting or tech support. I wasn’t the only person having trouble. So, here’s what we learned about getting things working:

Silly, really: standard things to check, but it took us a bit to figure this out.

Things that were absolutely awesome

If you haven’t tried an unconference, find one that interests you. Go to it. One of the joys of academia is finding the people who get what it is you’re into, and having a free-flowing conversation that makes you think different. No conference posturing, no bullshit. Academia the way it was supposed to be. Today reminded me of that again, and I feel re-energized.