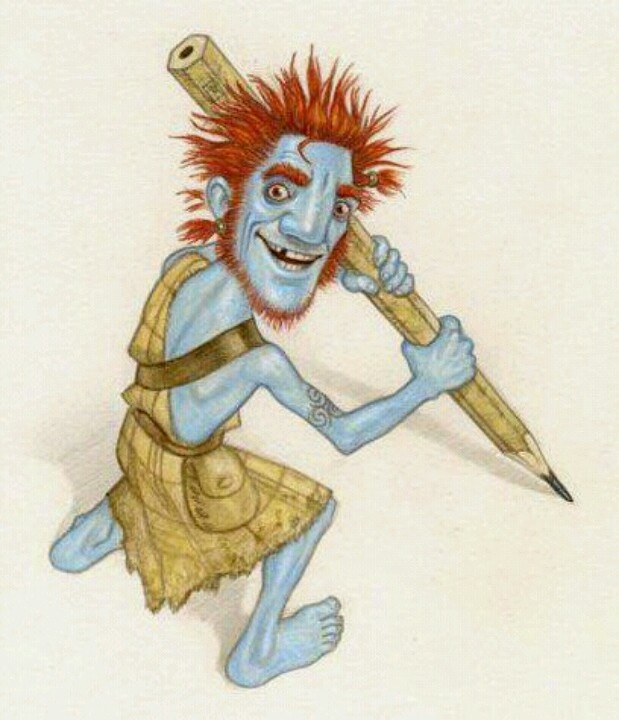 At dawn Rob Anybody, watched with awe by his many brothers, wrote the word: PLN  on a scrap of paper bag. Then he held it up. ‘Plan, ye ken,’ he said to the assembled Feegles. ‘Now we have a Plan, all we got tae do is work out what tae do.”

I’m reminded of this as I see retweeted a slidedeck by George Veletsianos from this year’s Congress of the Humanities, ‘Crafting a Research Agenda (in memes)’.

So I’ll share an edited version of something I wrote earlier this month (removing some names and details). Sharing. It’s like eating your greens. You know you should do it, everyone tells you to do it when you’re young, you forget about doing it until much later, and then you do it out of a kind of duty to your (intellectual) digestive system. I like mine, though. I think it might actually work. If I share it, then I have to accomplish it, right?

My research plan for the next five years circles around four separate projects, each of which explores novel forms of evidence and the humanistic consequences of ‘big data’ approaches. The central question that unites the projects is the one posed by Laura Madsen in a recent Los Angeles Review of Books interview: ‘how must humanities disciplines change if we are no longer working in a print world’? That is perhaps the fundamental question underpinning all work in the digital humanities.

The connective methodological tissue between these three projects emerges from the intersection of my initial academic training in archaeology, with my teaching and research in digital public history. They involve various kinds of data mining and data modeling, combined with forms of visualization that move beyond so-called ‘screen essentialism’. Indeed, they depend upon taking seriously Drucker’s famous notion of ‘capta’ rather than ‘data’ (that is, acknowledging that data are created, captured, from the questions asked and methods used rather than being things ‘out there’ with an independent non-subjective existence), and so the processes of data capture and modelling, the building, are foregrounded in these projects.

The fourth pillar of my research plan is to build or enhance a collaborative ‘space’ (whether administrative or physical) for undergraduate and graduate students, scholars, and the public to work together. Inspired both by the Maker movement and the ‘Fab Lab’ approach of scholars like Jentery Sayers and Bill Turkel (where humanities questions are addressed through the process of making or fabricating physical models), I see it as a space for scholarship regardless of an individual’s local affiliation. The space would be anchored by a cohort of graduate students from across the university and it would encourage research that looked outwards tying humanities research to the wider world. Obviously, Scholarslab is a beacon.

Below I describe how my research plan will come together. It begins with my teaching (as praxis, separate from my content areas of teaching interest), and then moves through my near, mid, and long-term research interests.

Continuing Research on Digital Pedagogy & Teaching Inside Out

When I build, I build with my students, and I build in public. These are critical components to my research. My philosophy of teaching revolves around the idea that teaching needs to be done in the clear light of day. That is, I try to turn the classroom inside out. When the classroom is inside out, this necessarily transforms the relationship of teacher to student, learning and knowledge, received notions of ‘appropriate’ forms, and notions of ‘failure’ and ‘success’.

‘Teaching inside out’ emerges out a sustained research engagement with Open Access as praxis, and making as knowing. I am interested in exploring with my students questions such as, how do we widen the perception of what academic work can be in the humanities? What is the role of the digital in all of this? There is a small-c conservatism in History, for instance, that makes it difficult to move beyond the essay and the monograph as the ‘required figures’, as students resist when things ‘don’t look like history’ (Graham 2013). But, as Mark Sample argued in a 2009 post,

Why must writing, especially writing that captures critical thinking, be composed of words? Why not images? Why not sound? Why not objects? The word text, after all, derives from the Latin textus, meaning “that which is woven,” strands of different material intertwined together. Let the warp be words and the weft be something else entirely.

This is a risky strategy. It necessarily involves making everyone (myself included) uncomfortable. It also interferes with the very well-established game of being a student, and the instrumentalization of the university degree (as something with given inputs that must necessarily lead to a desired output, a well-defined job). However, the rewards for my students who embrace this approach are vast. My research to date has been more focussed on questions of digital and hybrid pedagogies, dealing with these exact issues. To that end, I have recently published an introductory textbook (‘Exploring Big Historical Data: The Historian’s Macroscope’) for doing digital history with Ian Milligan (Waterloo) and Scott Weingart (Carnegie Mellon). (There is a workbook I devised that both supports and extends the Macroscope, and can be freely copied from http://workbook.craftingdigitalhistory.ca). The teaching part of my research plan for the next five years involves writing and publishing (in whatever appropriate format) works that elaborate on The Macroscope in order to push into scholarly forms beyond the textual.

Teaching and research cannot be separated cleanly in the digital humanities. Thus, woven through these three projects is a continuously evolving project on digital and hybrid pedagogies:

In recent years, computing power has become such that procedurally generated games bear more in common with complex emergent simulation engines than the arcade-cabinets of yore. This project is an umbrella for a number of interests in the way these computationally powerful games engage with the past. We call this ‘archaeogaming’ because it shifts the contextual interrelationships that archaeologists typically look for ‘in the real world’ to the game world.

Beginning in the summer of 2016 I am participating in the “No Man’s Sky Archaeological Survey”, led by Andrew Reinhard. Reinhard’s project is described here: https://drive.google.com/file/d/0B0qn_O39OBdmV21ZQm9YQlh0N00/view . My particular interest in this project is in disentangling the networks of power and resource extraction that enable such a project to take place. This involves looking at the social and physical networks and supply chains for game hardware, for instance. With regard to the emergent properties of No Man’s Sky (a video game that will be released in June 2016 on multiple platforms), I am drawing on my work on agent based simulation (which can be framed as ‘games that play themselves’) to understand the role of humans in the computation that makes these games work. A ‘computer’ was once a female human doing computational work; now we have (typically) men designing (gendered-female) AI and worlds for (often) men’s amusement. How does gender play out at the level of computation in a procedurally generated world?

In terms of outputs, I envision a series of articles detailing the rationale and methodology for the project, the findings of the project, and the wider implications. An article on the intersection of agent based modelling methodologies and the analysis of procedurally generated worlds is already in the works for the conference proceedings of this spring’s ‘Interactive Pasts’ conference at Leiden. Tangential to this project is an agent based simulation project with Tom Brughmans.  We are collaborating on agent-based simulations of the Roman economy, testing various theories about the social aspects of Roman economic practice. We are looking at ways of communicating this research through resource-management type games (‘SimCity’- like games). The SSHRC Connections Grant application concerning digital archaeology is built around Dr. Brughmans visit.

Visual Grammar of the Bone Trade

This project emerges from a serendipitous encounter at the Society for American Archaeology conference in 2015 in San Francisco. Damien Huffer, an osteologist, has been exploring, one click at a time, the trade in human remains facilitated by such websites as eBay and Instagram. I have introduced various data mining techniques to automate and speed up this research, such that we now have a dataset of several thousand images. Damien is the PI. We are employing various computer vision and machine learning techniques to classify, cluster, and determine ‘visual grammars’ for signalling online when grey-market materials like human remains are available for sale. Variations on the theme of ‘hiding in plain site’ are visible to the eye in these images, but are often hard for the computer to detect. The research also involves text analysis such as topic modelling and word vectors to understand the oblique vocabularies used to support this trade (most posts scraped do not have text, but over thousands of images word patterns do build up).

This research has wider implications for other illegal or quasi-legal trades facilitated online, including illicit and looted antiquities, drugs, weapons. I have currently an outstanding access to information request from Canada Heritage concerning Canada’s role in the antiquities trade. When these documents are made available to me, I will be incorporating the computational analysis of those materials into this project as well.

There is an effect, whilst listening to music, called the ‘auditory hallucination’. It is the hearing of patterns (words, etc) that are not, strictly speaking, in the music. Generally, what this effect shows is that we fill the holes in representations of data with our own expectations. My long-term research programme for the next five years builds on this observation, as well as on my own teaching practice (which has always been intertwined with my research). My ‘Humanities Hallucinations’ project aims to

In this past year, I have built exploratory models of ancient Greek tragedies using markov chains, and recurrent neural networks. I’ve used bone trade image data to make sonifications, while at the same time 3d printing that data to make haptic representation of digital data. I am thinking of these ‘toys’ and ‘models’ as ‘hermeneutica’ in the sense argued for by Geoffrey Rockwell and Stefan Sinclair in their recent hybrid publication, Hermeneutica. That is to say, they are tools to think with that embody their own arguments. As Voyant-Tools is to text (a series of reconfigurable text analysis visualizations that may be embedded in other forms of publication), I want to develop similar tools and toys surrounding these humanities hallucinations. I would use the data from my other projects to build these hermeneutica and work through their potentials; I would publish this work via a web platform to allow others to repurpose my methods and code to their own work with accompanying monograph, a kind of ‘Voyant Tools’ for sound and haptics.