I went to Carleton’s ‘Big Data Day’ yesterday. My student, Hollis, had entered a poster in the poster competition, detailing his approach to data mining the audio recordings of THATCamp Accessibility. Looks like he and I were the only two from the humanities end of the spectrum at the event. The day opened with a panel discussion, then a series of presentations from faculty involved in Carleton’s new MA in Data Science (which it appears has support from IBM; there’s a webpage at Carleton but it has a warning on it to all and sundry not to share the link. So go to carleton.ca and do this search). Carleton has aspirations in this regard. The program, and the event, was a collaboration from Computer Science, Biology, Business, Systems and Computer Engineering, Economics, Geography and Environmental Studies.

(And of course, not to be confused with our MA in Digital Humanities, which does not have support from a major tech firm). 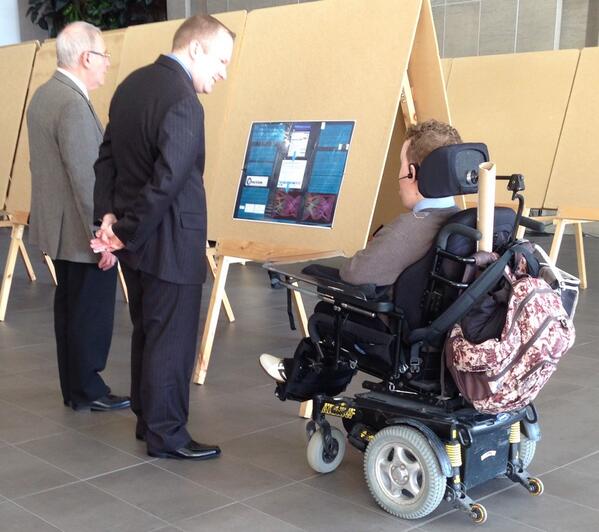 Anyway, some observations on what this particular approach to big data seems to be about:

2. Data are an unalloyed good.

4. “You can have privacy, or you can have cool online stuff. Which do you want?” – this from the Shopify data analyst (biology grad, self-described hacker).

I had a question for the panel. I asked about algorithmic prisons: the uses to which data are put. I pointed out that the data, by themselves, mean nothing. Interpretation, power, and control, and the creation of algorithms that have a view of the world which may not in themselves be warranted. Wasn’t there a role for the humanities in all of this?

Well bless my little cotton socks. It is rare that I am on the receiving end of techno-condescenion. I hope to god I’ve never done this to some one else – make assumptions about your level of engagment or knowledge of the field this way –  but it was apparent that I lost the panel the moment I said, ‘hi, I’m from the history department’. The shopify guy proceeded to lecture me on disruption, and that even the book was a disruption; but we got over that. Unintended side-effects? Sure, there’s always those, but don’t worry.

Big data will save us.

Shopify guy did have one interesting point to make: it’s not ‘big data’, but ‘big interest in data’. He then framed the 20th century as the century of deterministic solutions, whereas the 21st century will be the one of statistical solutions.

On the privacy issue, one comment from the floor in response to the ‘you can have privacy or you can have cool online tools’ was, ‘you’re just not trying hard enough’. The day progressed.

There were good points throughout the day; one of the data librarians from Carleton talked about data research management plans.

That’s why you need humanities.

As I was sitting in the room, I was also following the tweets from #caa2014 and #saa2014.  At those two conferences, archaeologists are wrestling with big data issues themselves. Hell, archaeology could be the original big data (if measured in sheer metric tonnage… but also in more conventional measurements of data). But what was striking was the contrast between the two displicinary perspectives. The archaeologists were a lot more humble in the face of dealing with big data describing the human past. There were tweets about uncertainty (about how to model it; about how to think through its implications). There were tweets about power, control, ownership, engagement, community. Tweets about liberation, tweets about being chained. (I’m freewheeling right now, from memory, rather than linking through).

Humility was lacking, at data day.  More data, better data, and our algorithms are an unalloyed good.

I’m not against making money. But… but… but… not like this.

So. The takeaway from this day? The big data, analytics-for-business crowd, need the humanities. There’s space there already in their discussions, though they don’t seem to recognize it. Or at least not yesterday.