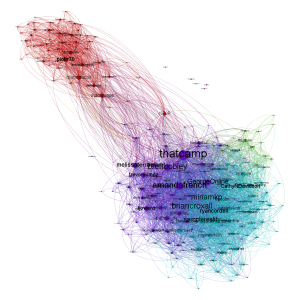 THATCamps are quite popular. I’m throwing one myself. But who are the people talking about them on Twitter? What does the THATCamp look like on the Twitterverse?

I used NodeXL to retrieve the data – a search for tweets, people, and the links between them. I then visualized the data in Gephi, where colour = community (per Gephi’s modularity routine) and sized the nodes (individual Twitterers) using Pagerank, on the premise that this was a directed graph and one should follow the links (although there was little difference with Betweeness Centrality. Major players are still major, either way).

I found 233 individuals, linked together by 4435 edges. Some general stats on this directed network:

And now the visualization. You can download the zoomable pdf here.

As I look at the modularity in this graph, at first blush, you can see quite a North America / European divide, with various satellite outposts. This could be of course because there’s a THATCamp Paris coming down the pipe (lots of French in the tweets).