[Originally posted on Play the Past, October 13]

In Matthew Johnson’s excellent ‘Ideas of Landscape‘ (Blackwell, 2006), he talks about the way archaeologists and historians look at landscape. (See Bill Caraher’s blog review piece). Landscape-as-palimpsest has been one of the most powerful metaphors for understanding landscapes and how they are formed. (A palimpsest being a manuscript that has been overwritten numerous times, with the earlier layer being erased more-or-less completely so that the parchment can be reused.) Johnson argues that the metaphor is too strong, in that while it helps us to untangle what we are looking at, it deflects attention away from what this ‘text’, with its grammar and sentences, all actually means (58).

In which case, I wonder if a playful approach to landscape might be useful? Instead of teaching students to ‘read’ landscapes, might ‘playing’ landscapes be better at generating meanings that go deeper? Katie Salen and Eric Zimmerman, in ‘Rules of Play: Game Design Fundamentals’ (MIT, 2004) situate meaningful play as a relationship between “player action and system outcome”, where both are “discernable and integrated into the larger context of the game” (34). Discernability in a game relates to being able to actually perceive whether an action had some sort of outcome; integration means that the action has consequences for later stages of play (35).  I’m suggesting then that the game of reading landscapes would not stop at just reading some aspect of past human activity in the landscape. Rather, it would be framed as part of some game whereby it competes with other readings of the landscape, where the story of the landscape emerges from game play, through some process of physically annotating & crafting competing visions of the palimpsest.

In short, an augmented reality game. 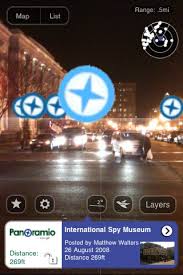 There are many competing definitions of augmented reality out there, but I think it is simplest to think of it as the imposition of layers of information onto the day-to-day experience of life. A GIS is not an augmented reality; but if you could project a GIS map of census data onto the field of view of a person standing in that street, it would be AR. Similarly, a device projecting Twitter streams about a place or made in that locale onto a screen in that place, is also a kind of AR. A Terminator style helmet with heads up display is AR; a two-dimensional bar code that whenscanned loads up a wiki page about the scanned object onto your cell phone is also AR. There is then a lot of potential ways to realize AR, and most of them no longer require lots of money or specialized equipment.

My putative reading-the-landscape game would be smartphone based.  It would involved annotating the world with what you are seeing, with some sort of ratings mechanism to ‘lock in’ readings of the landscape. The higher the ratings for your reading, the more points you get; points can be cashed in to overturn someone else’s readings. I think that would qualify as both discernable and integrated, per Salen and Zimmerman? Reading the landscape then becomes a contested activity, which reflects how landscapes can be made in the first place… This is just a first stab at the idea, but I think there’s potential here?

Some examples of existing historical/archaeological AR approaches or projects (all of these use the geolocating features of smartphones to ‘know’ roughly what you are looking at, and they display the data overlays on the phone’s camera as a heads-up display):

What AR applications/platforms are you using for your playful approach to the past?