As part of my Digital History class, I introduced the students to the concept of alternate reality games. I don’t know of any that exist with the explicit purpose of teaching history, so we looked at some of the standards – I Love Bees, The Beast, Majestic. We looked at the work of Jane McGonigal. All in all, it was a fun couple of sessions. At the end of the last session, I mentioned that while I was in the library, a piece of paper fell out of a book I was reading, and this is what it said: 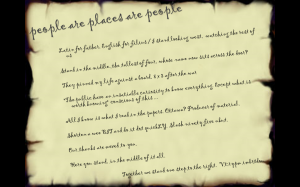 What could this mean? Points to the group who solved it first!

So that was my attempt at using some of the basic conventions of an alternate reality game – the puzzle, the riddles, the treasure-hunting aspect – to teach history. “Is this worldwide?” one student asked. “Safe to say, limited to this city” I replied.

I figured it would take them a couple of days, if they really tried hard. The first group returned two hours later with the whole thing solved! So what was I trying to do with this? By calling it ‘people are places are people’, I was pointing to the way we name buildings on the campus here. The first clue too was pretty easy, and I figured that when they solved it, it would alert them to the fact that we were looking at the buildings on campus here. To solve the puzzles, they had to perform one of the authentic tasks of the historian, and read closely.  But some groups didn’t read the clues very closely, and were stumped almost from the word go.

Interestingly, one group took my off-hand comment about ‘limited to the city’ to imply that the game would be played all over the city; and the line, ‘people are places are people’ to mean the founder of Ottawa, Lt Col. By. Amazingly, they found locations, statues, historic plaques all over Ottawa’s downtown that *could* be thought of as the answers to my clues… so in interacting with my text, they found items completely unrelated to my intentions – the sort of thing that happens when working with historic documents all the time, after a fashion.

As part of my continuing exploration of 7scenes, I’ve also tried translating it into a smartphone application. If you’re around Carleton, give it a try and let me know what you think. Consider this still as *draft*.

Some of my student feedback:

“[…] It is hard to figure out exactly what the clue means and once you find and solve and reveal the clue, you don’t want to stop.
Personally, I thought this game was really challenging because you didn’t really know where to start with a clue that could deal with generally anything. Once you figured out the clue or were on the right trail, I thought was exciting because it felt more like a race to be the first one to crack the clue. […]”

“[..]What worked for me about this game was the mystery behind it. It really captured my attention because it had kind of like a secretive aspect to it; it made me want to decode the mystery. The “rabbit hole” of the game is to figure out the first clue first in order to solve the rest of the clues and therefore solve the riddle[…]”

“The procedural rhetoric is I suppose to inspire active as opposed to passive learning about a subject that, while right under our noses, goes overlooked even though it has a lot of history. The rabbit hole was the sheet of paper falling out of a book in the library.

I found that this game touched on every aspect of what makes a good augmented or alternate reality game, but what I found to be most frustrating was the appearent lack of an overarching objective, that is to say something that tied them all together explicitly and not just generally. I feel that the game could have been better if there was a longer back story with the rabbit hole, like a hint dropped about what we should look for based on what you were researching in the library. It was a fun experiance over all though, I enjoyed learning what I did and it was nice to be able to do so in a group.”