I recently wrote about trying to get Platial to map various kinds of data. Today I tried Yahoo Pipes. Again, the task was relatively straightforward: can I get an RSS feed of archaeological data – such as ancient places in the (non-mapped) Pleaides website database – onto a map without having to point-and-click each individual place?

First of all, I searched the various existing pipes that others have created. A pipe, by the way, is a collection of different modules ‘piped’ together to mash together different kinds of, and sources of, data. The pipe updates itself when the in-coming data changes. I found the geo-annotated Reuters news pipe, by el80n. This pipe collects information from the Reuters news-feed, extracts the locational information from it, finds out the actual coordinates for that location, and then displays the result on a yahoo map.

I swapped the feed from Reuters to Pleiades’ Archaic places, and la voila. A number of the sites from that list turned up on the map. Now, there’re a few bugs in it. The place-extractor looks at the feed, and grabs the first ‘obvious’ place name. In Reuters, that’s the modern name. In Pleaides, that’s the ancient name. The database that contains the geocoding only has modern names, so things get a little odd. For instance, Artamis (modern Messa), gets mapped to an island in the South China Sea. There’s a query builder in the pipe, so I need to figure out how to get it to grab the modern name, while labeling the map with the ancient name.

All of this took about an hour. I had never used pipes before, and all I really did was swap feeds. Imagine what somebody who knew what they were doing could accomplish! You may view the live result here. 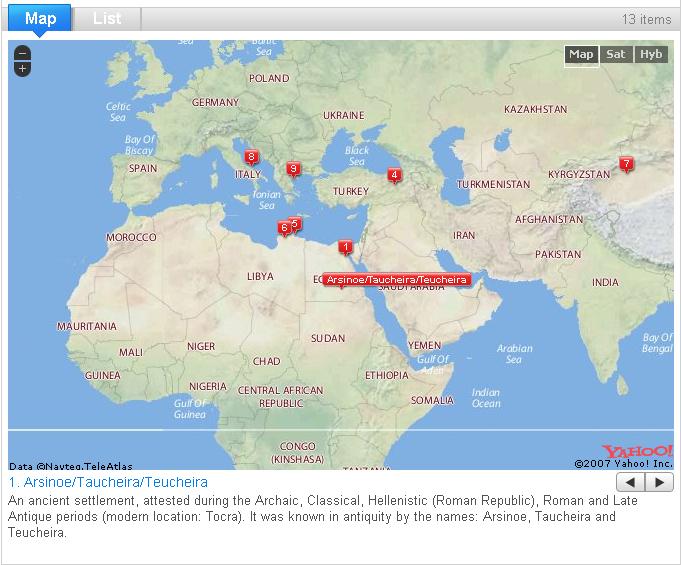